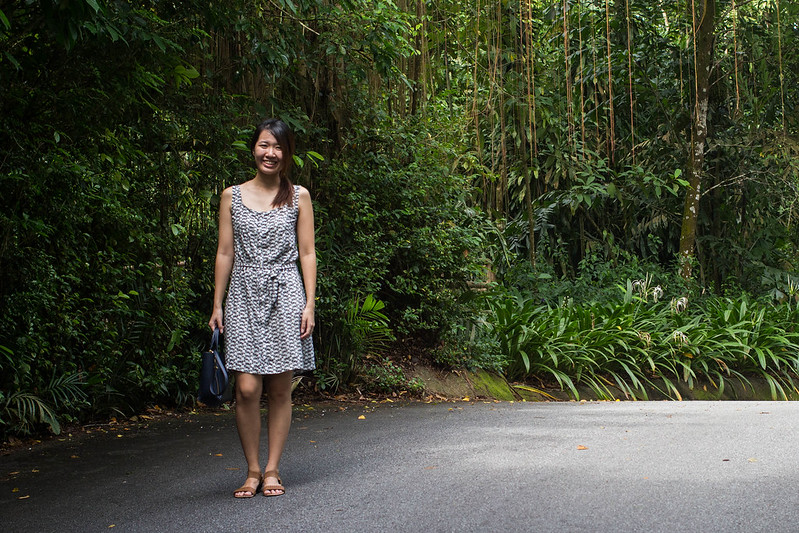 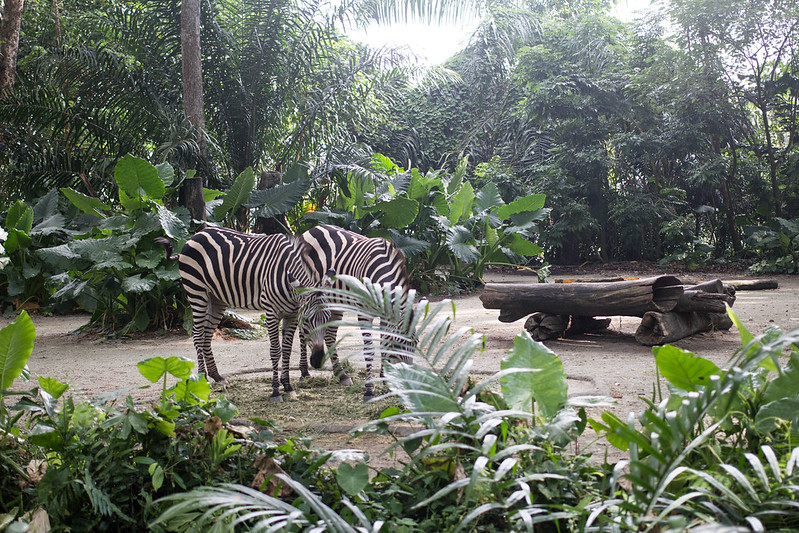 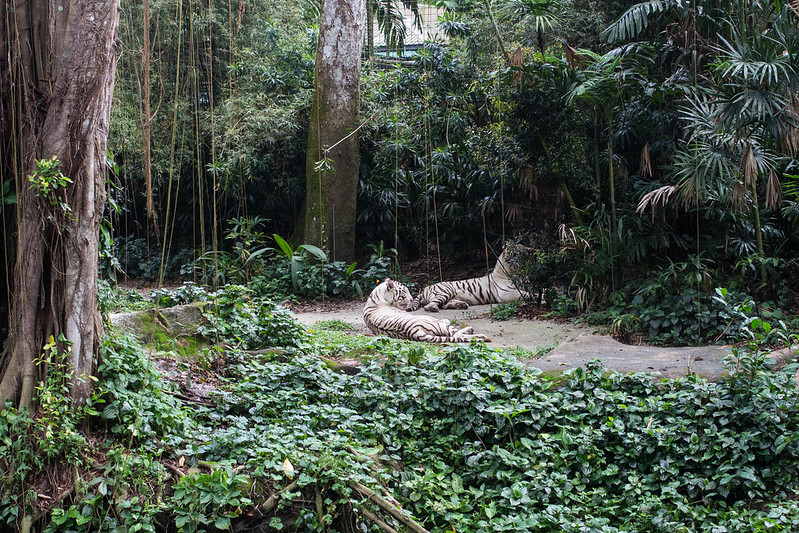 One of my favourite things about being able to make my own clothing is themed apparel – which is a thinly-veiled euphemism for ‘dressing according to a theme even though it isn’t halloween whilst pretending you have no inclinations towards cosplay’. Case in point: this zebra dress that I made specifically for a day out at the Singapore Zoo and River Safari. So intense was my need to wear an animal-themed outfit to the zoo that I safety pinned myself into this dress because I had run out of snaps and I just couldn’t deal with the idea that I might have to go in *shudder* normal non-zoo-related clothing. 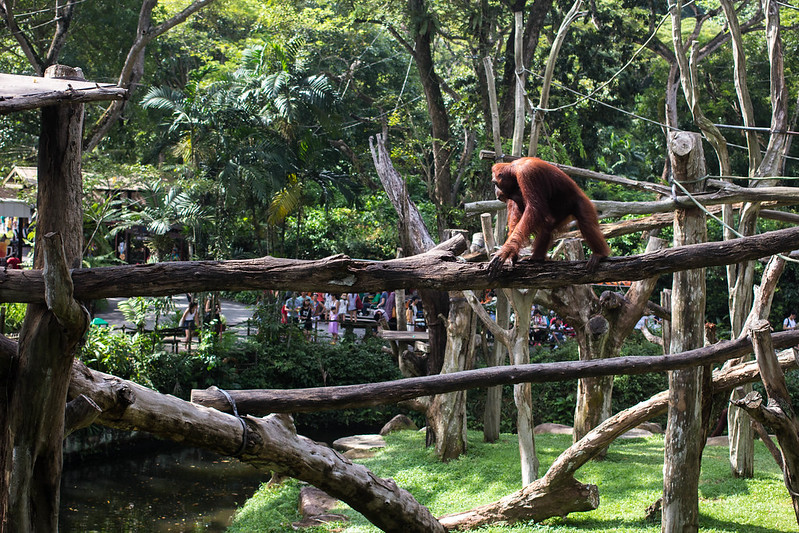 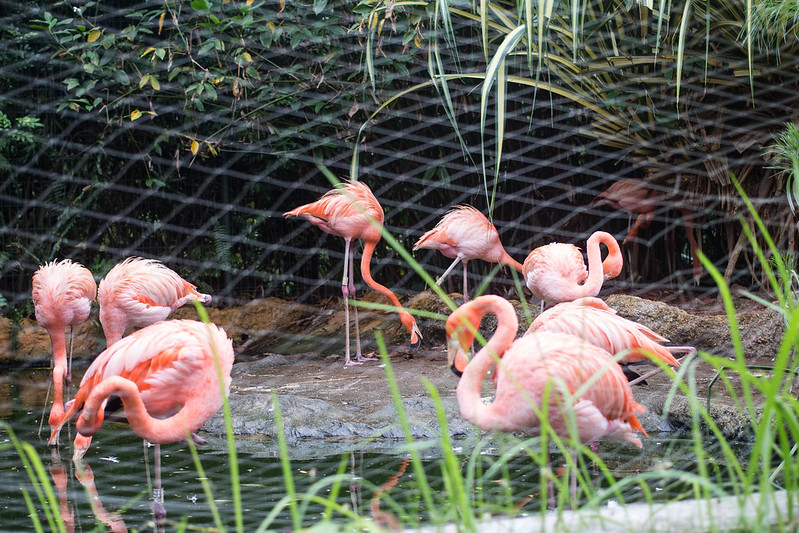 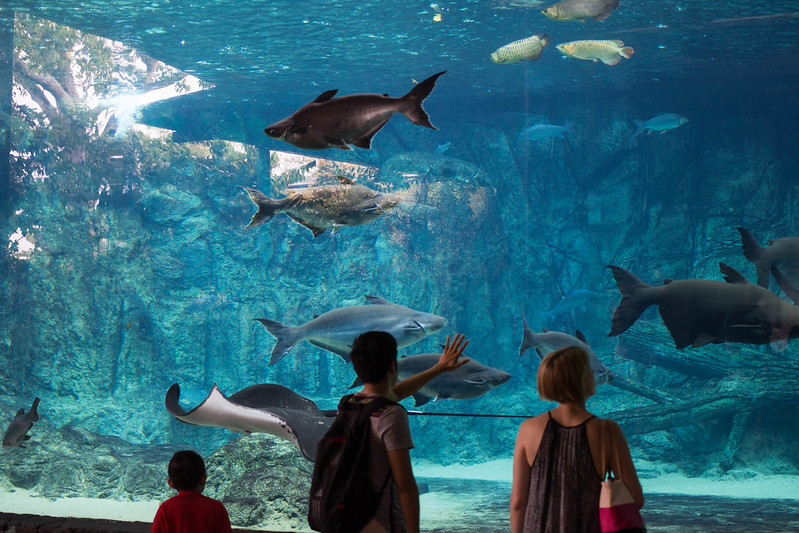 I really enjoyed the River Safari but the zoo got a little boring after a couple of hours. Funny how the place seems HUGE when you visit as a child, but once you’re grown, everything looks like it shrunk and the exhibits seem dated. Snapping some cheesy photos in my Zoo dress was vastly amusing though (albeit embarrassing). I took photos with a zebra striped-tram, a zebra crossing, a zebra sign and the zebras themselves (the real ones) – I must have taken a picture with every zebra-themed item in the place! 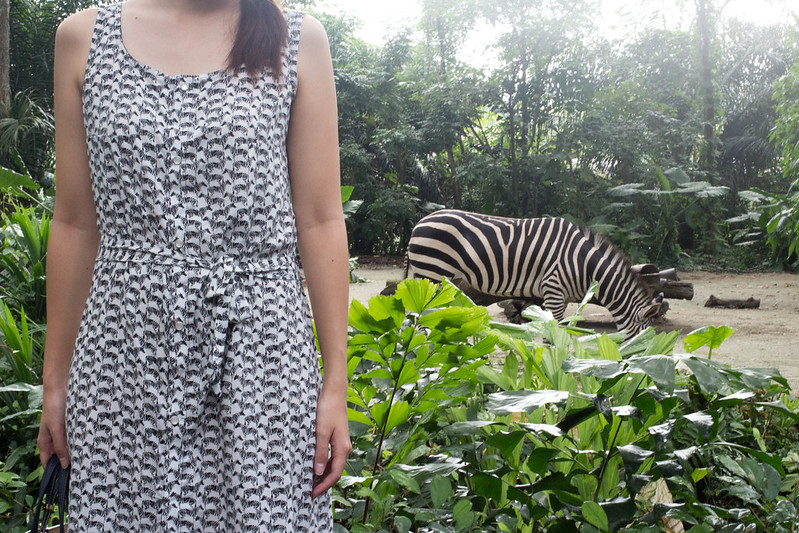 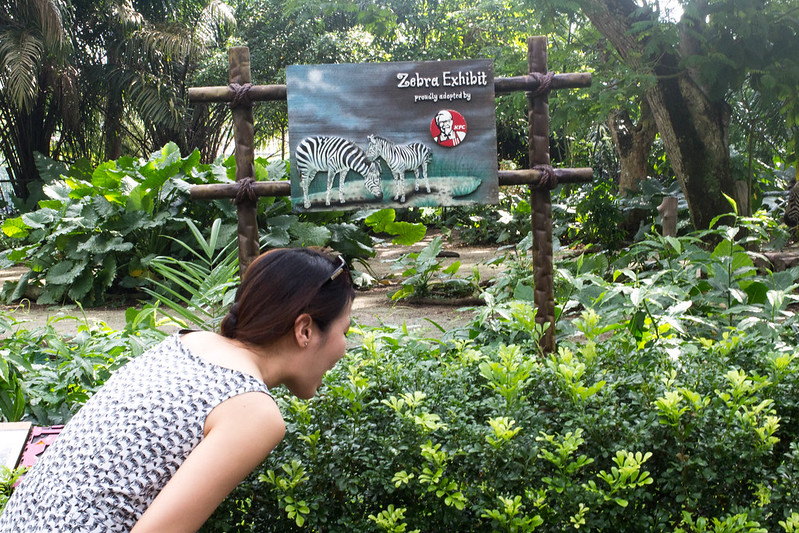 This dress was a relatively quick make that I now see could use some fitting adjustments (as always, I was way too lazy to make a toile…).  If you look closely, you’ll see that the shoulder seam tends to run over my shoulder and down to the collarbone because of the weight of the snaps and placket. I contemplated fixing this by pinching out the excess from he shoulders, but this tended to make the armhole too tight for comfort. On my next make of this – trust me, there will be one – I’ll probably do either a small bust adjustment or pinch out some width from the front neckline to raise the neckline a little and to prevent gaping. 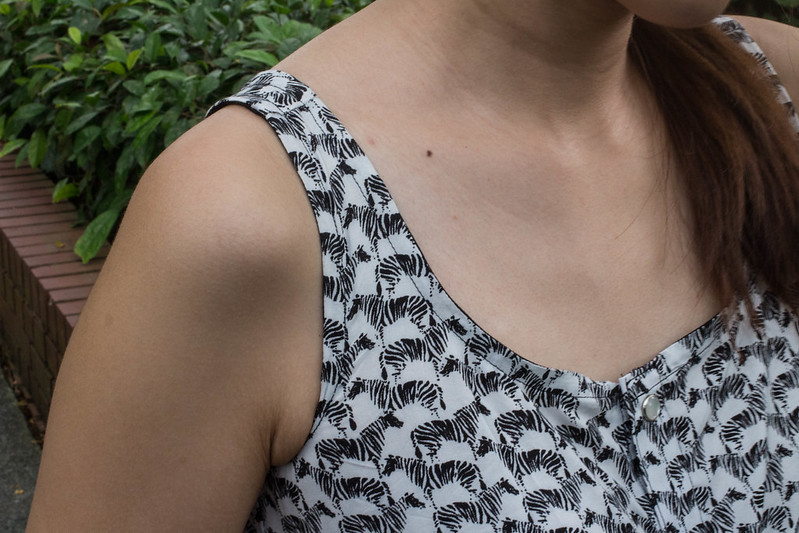 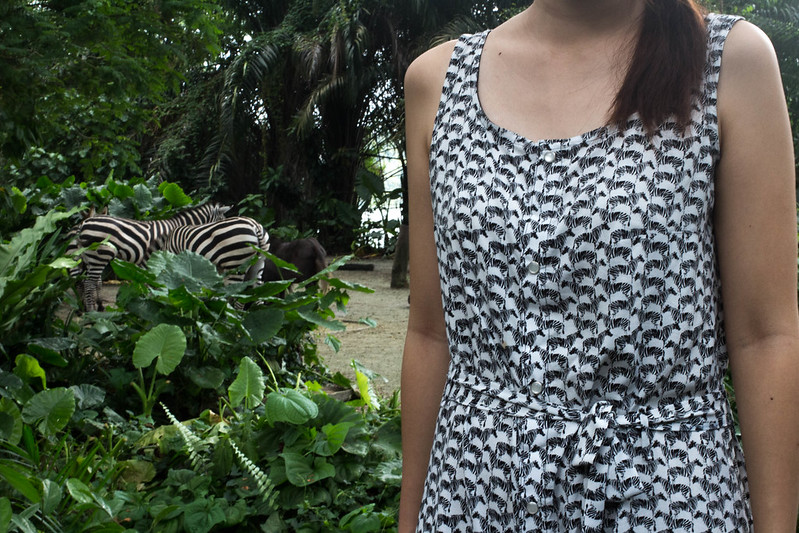 The pattern used is the Seamwork Adelaide Dress which from what I’ve seen is the most prolific Seamwork pattern todate! (I especially love Rachel ‘s made up in funky vintage sunbathing ladies fabric and this one with pockets on La Petite Josette.) The fabric is a zebra print rayon from Spotlight that I got on sale, and the neckline and armholes are bound with store bought black bias binding. I did french seams on all the interiors which means it’s actually really neat on the inside (for once!).

I cut a size 0 in the bust (woe betide small busted ladies who try to sew Colette’s C-cup patterns…) and graded it out to a size 4 at the waist and hips. I cut a size 6 length at first because I was concerned it would be too short, but later took 2″ off the bottom again and hemmed it by folding in by 1/2″ and later by another 1″. There were a couple of issues with the placket – mostly my fault, as I used the bias binding method from the Megan Nielsen Eucalypt Tank pattern which didn’t make sense when paired together with the placket directions on the Adeleide dress! Apart from that, I ran out of snaps and later found that my snap pliers were the wrong size causing my snaps to turn out wonky… But all’s well that ends well! I’ve since replaced all the old snaps with new ones that are a lot more secure. 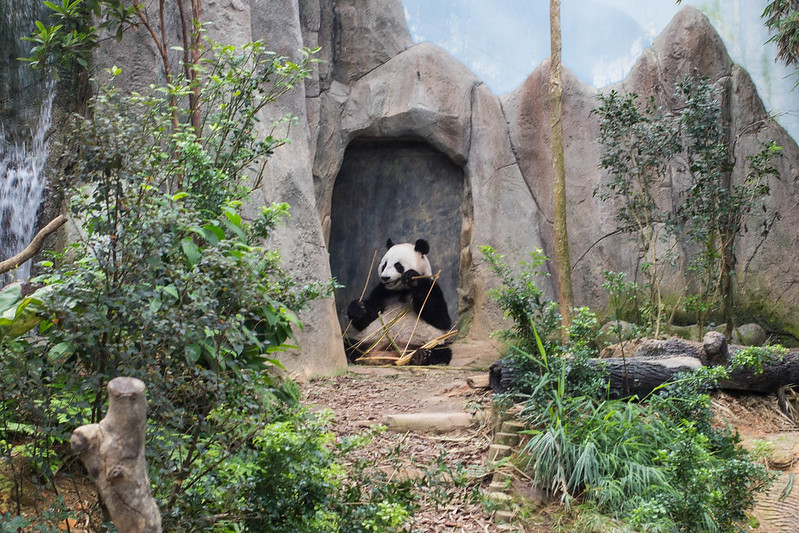 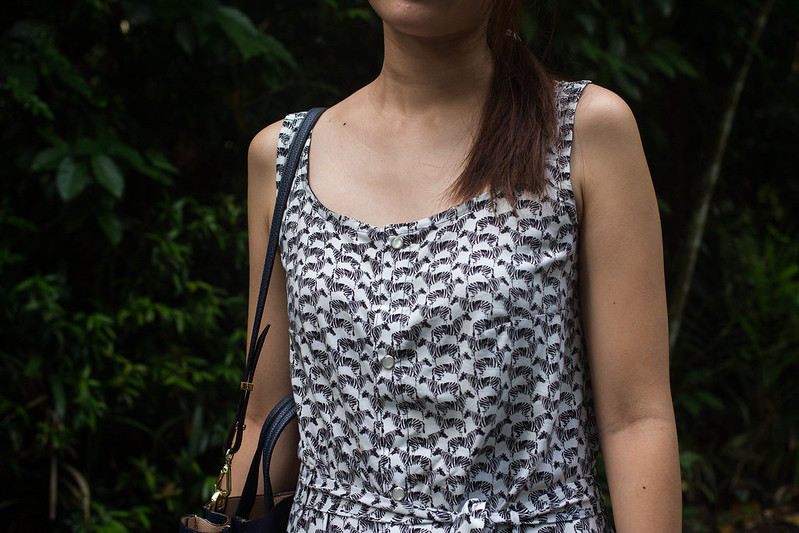 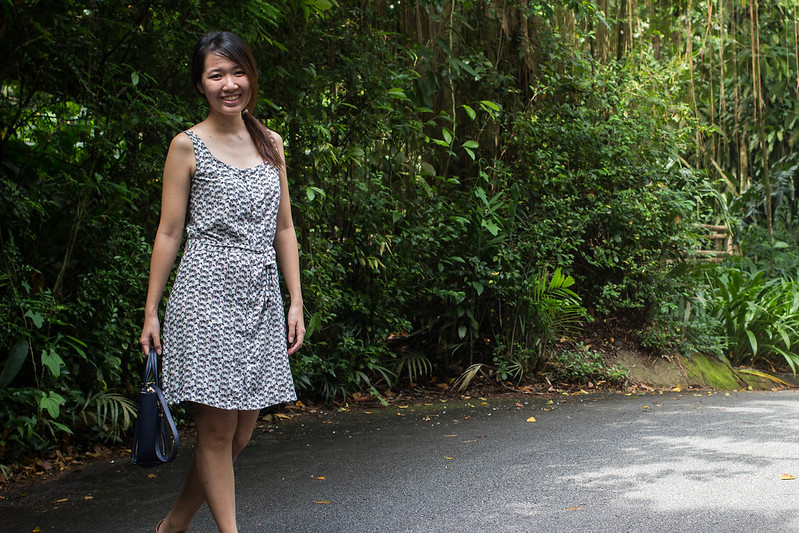 I’ve already got big plans for my next one out of a chambray shirting from the stash, I just need to figure out the fitting issues and find myself some nice wooden buttons (buttonholes I WILL conquer you grr)!

Make sure this account has posts available on instagram.com.

Error: admin-ajax.php test was not successful. Some features may not be available.

Please visit this page to troubleshoot.